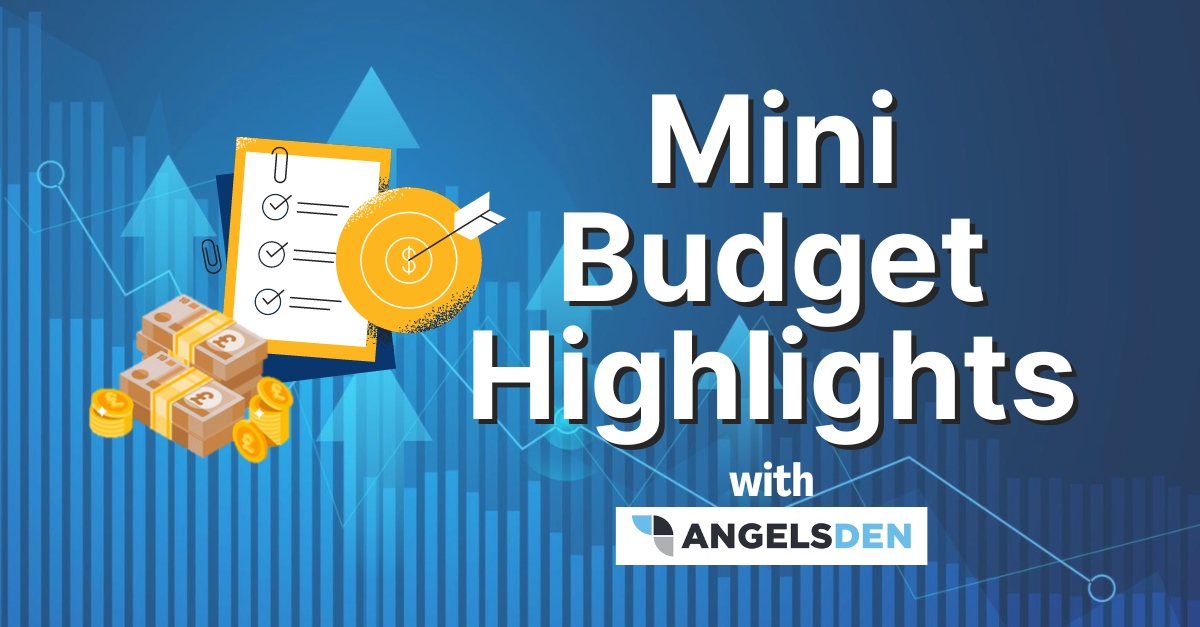 The mini-budget updates were announced by The Chancellor Kwasi Kwarteng this morning and here we are, bringing you all the scoop! There are still a lot of details missing, which will probably be made clear in the upcoming months.

The purpose of these changes is to stimulate UK’s economic growth specifically targeting small businesses. Here are the highlights:

Let’s start with the most important change for startups and angel investors. The limit for SEIS will now be £250k, and the company age has been expanded to 3 years instead of 2, giving more investors and companies the opportunity to benefit from this tax scheme. For exploring investment opportunities in SEIS Eligible startups pls express interest here

The UK’s corporate tax rate will not rise to 25 per cent – it will remain at 19 per cent, the lowest rate of corporation tax in the G20, potentially releasing £19bn for reinvestment. The reversal will cost an estimated £17bn, according to The Times. However, the Institute for Public Policy Research (IPPR) has doubts – the UK had the lowest business investment of all the G7 in 2019 despite having the lowest corporation tax of these countries, so we will have to wait and see if this year is any different.

The annual investment allowance for businesses will be permanently set at its highest level of £1m from April 1 next year. This will give 100 per cent tax relief to businesses on their plant and machinery investments up to the level of £1m.

The government is in talks with 38 local and mayoral combined authority areas in England to set up new investment zones. The zones will offer targeted and time-limited tax cuts in addition to less red tape for businesses in a bid to increase productivity and create jobs. Work will also begin with Scotland, Wales and Northern Ireland to agree zones in these locations.

The Prime Minister may be considering a reduction in VAT from 20 per cent to 15 per cent across the board.

But there is good news for tourists, as now people visiting the UK will be able to benefit from VAT-free shopping. Previously, tourists from outside the EU could qualify for tax-free shopping – But today’s announcement extends that to anybody visiting from outside Britain. But VAT-free shopping could be tricky to implement, given that it involves a new digital system and HMRC’s record when it comes to rolling out new tech is patchy.

The Chancellor committed to repealing reform of IR35, which treats independent contractors the same as employees for tax purposes but without giving them the benefits that employment provides. However, he stopped short of scrapping IR35 altogether. The IR35 reforms, which rolled into the public and private sectors in 2017 and 2021 respectively, will no longer apply from April 2023. Instead, the original rules will remain, and contractors will be responsible for assessing their own tax.

The company share option plan (CSOP) limit that allows businesses to offer employees share options is being raised from £30,000 to £60,000.

There are a lot of new changes. It’s hard to tell what will happen, but we hope these changes will positively impact startups and the economy. What were your thoughts on the budget? We would love to hear your views in the comments